This should be aptly titled Mother’s Weekend Roundup!

First and foremost I got to sleep in on both days this weekend. Getting a day to sleep in isn’t unusual as we usually do that for one another; however, two days in a row was a treat! Also, please note I use the term ‘sleep in’ rather gently. This really means hearing my son on the monitor at 6:30am, hearing my husband get up to get him and then laying in bed for a few hours pretending to sleep. On my days to ‘sleep in’ I will usually go back to sleep briefly after my husband gets up then it’s followed by surfing the internet, catching up on Bravo TV shows and pretending to be asleep anytime my husband walks in the room to grab something. (I think the jig may be up on that last one, apparently I don’t toss my phone aside and close my eyes quick enough)

It was an overcast day but we headed to the beach anyways because that’s what I wanted to do! It was pretty packed on a Saturday of course but it was nice to sit and watch John Michael play for a few hours. Having NOT grown up by the beach, it’s so nice to be able to go for a few hours on the weekend and relax instead of a once a year vacation to it!

We headed back home in the afternoon to get ready for our date night, dinner and a movie! The movie was my pick so I picked Tully. Pro for me was that David had no idea what this movie was about and quickly agreed to whatever I wanted to see. In fact, a little bit into the movie he turned to me and asked me if this was going to turn into a comedy because it seemed depressing. Umm, yes? I won’t give any spoilers away on the movie. It was pretty good and had a very good unexpected twist. However, as we are about to welcome our second baby into the family it was also a tad depressing. It was a good reminder to make sure I get my postpartum care in for sure haha 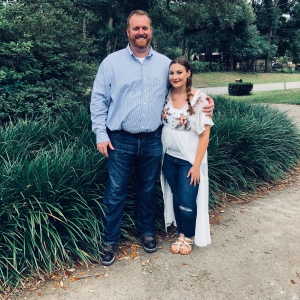 Sunday was another morning spent  laying in bed pretending the ignore the chaos outside my bedroom door. It was great! Our son went to Sunday school

then childcare while we went to church. After church we lounged around the house (another overcast day) & then decided to head to De Leon Springs in the afternoon. By the time we arrived it was later in the afternoon and the crowd had died down. John Michael had a blast swimming with dad and running around. We also took a quick paddle boat ride (which he was over the minute we got in the boat but that’s ok). It was a great afternoon spent doing something new and different!

How did everyone else spend Mothers Day this year? I hope your family treated you or you treated yourself!

Catherine here! I am the mom behind Wonderfully Wright. A mom to a two year old boy and a baby girl on the way! Our family also includes two crazy dogs, Sophie & Savannah. Here you'll find me sharing our life through parenthood and womanhood. A blog for all things real! Welcome!